Thread(drives) are like many other technical areas nowadays: a lot of information, often fragmented and rarely clearly summarised. It is easy to lose track of the facts and become confused or overwhelmed by the mass of data and facts. In addition, a one-sided perspective often plays a role within this flood of information. Many people visualise only the external thread of a screw when they hear the word thread. Yet threaded drives have other distinguishing characteristics and many additional applications. In other words, there is more to this everyday object than most people realise.

We come across thread(drives) far more often in daily life without us actually noticing or being aware of them. The fact that many people simply do not realise where they are used may be one good reason for this. Yet these are small marvels that make many things easier and more convenient for us.

To alleviate this flood of information, we would like to share our expertise in an easy to understand way. To begin our blog series, we will take a look back into history.

What is the origin of thread(drives)?

Looking back on the historical origins of the screw - and thus the thread - different accounts are found. However, on closer inspection, there are basically two areas of origin: the screw principle, using the screw for conveying and pressing, but the screw was also used as a connecting element and fastener. The latter is a more recent application, whereas the screw principle was already in use in ancient civilisations. One of the most famous examples of this is the "Archimedes screw", also known as a snail pump, screw pump or conveyor.

The snail pump in a simple pumping system consists of a helix (a helical elevation that winds around a cylinder, ideally with a constant gradient) and a pipe that transports water between two troughs or receptacles, or between levels. In ancient times, this innovation was used to transport water to higher elevations for irrigation and drainage purposes.
It is thanks to Archimedes (287 B.C. - 212 B.C.), who is not only credited with the well-known exclamation "Eureka!" and coining the Archimedes Principle (the principle of displacement), that the foundation for modern-day screw drives was laid and thus the way was paved for many innovative products and applications.

What few people realise, however, it that the term or description "snail pump" is in fact misleading and not completely accurate. Although this name originated from ancient history on account of the resemblance to a spiral-shaped sea shell, it is neither a snail nor a pump. In fact, it is a constant-pressure hydraulic lift. Further information can be found in DIN 1184 or in our library of thread rolling 3/9 (german).

The German term Schneckenpumpe ( snail pump) was derived from the Dutch Vijzelpomp, because it is said that the Dutch were the biggest users of this type of pump over the last 500 years. Nevertheless, this claim is not yet sufficiently substantiated and hence should only be regarded with reservation.

To summarise briefly, the first mention of a thread-like object can be traced back to about the 3rd century BC, but this was not a screw, but rather a kind of pump, more like a hoist. So how did it evolve to the screw drive as we know it today?

The ancient screw: a hoist not a pump

As the name "Archimedes' screw" suggests, this invention is attributed to the Greek mathematician and technician Archimedes. Naturally, there is research and theories which state that similar devices had been used by mankind before. For example, the water screws in ancient Egypt or Archytas of Taranto (435/410 -355/350 BC), who is regarded as the inventor of mechanics, are cited here.

One of the first more precise details on the construction of such a snail pump is found in a work by the Roman architect, engineer and architectural theorist Vitruvius (1st century BC). More specifically, in the 10th volume of " Ten Books on Architecture" (in the original "De architectura libri decem"), which deals with the subject of mechanical engineering. Here, the specifications describe the exact ratio of the individual (construction) parts, their assembly, as well as the handling, although this is not explained in such specific detail. However, there are relics from this period that show the drive by human power.

From Vitruv (The Ten Books on Architecture) description of Archimedian screw. (source: Wikipedia)

Taking a closer look at the Archimedean screw, the thread-like shape of this screw is particularly striking. It is the same form used today for screws and threads. A connecting element that enables the realisation of fixed as well as removable fastenings. The first documented use of this fastening element was in Roman society. While the applications of the screws were less diverse than today, they were still used in medical devices and astronomical instruments. (there is a link here to ballscrews in astrophysics and more on the use of ballscrews in the medical field today).

From the Archimedean screw to familiar connection technology

Early on, it was recognised that this connection technology could be used to convert rotary motion into longitudinal motion. A good example of this is the ancient construction cranes and wine and oil presses, which utilised the amplification of forces by means of a thread and nut.

With the growing variety of applications, the materials used and the manufacturing processes and tools also developed further. While the Romans used silver or bronze depending on the area of application, wood was used for the wine or oil presses already mentioned. It is worth emphasising here that care had to be taken to ensure that the wood had a certain strength in order to prevent it from breaking during use.
However, the thread largely disappeared as a movement element during the Middle Ages and other drive mechanisms emerged.
“Drive” is a fitting keyword for the next chapter in history. Many associate the "Renaissance" solely with the cultural era that spanned three centuries in Europe. In fact, it was also the "rebirth" of numerous accomplishments from Greek and Roman times, and thus the revival of many inventions from that period.

Leonardo da Vinci (1452-1519), painter, sculptor, architect, anatomist, natural philosopher, mechanic and, not to be forgotten, engineer, is one of the most famous people of the era who needs to be mentioned in connection with the historical development of screw drives. He was the source of one of the oldest known descriptions of a tool for cutting threads,
and he worked extensively on different applications of threads. During his lifetime, he also created many sketches of moving and fastening screws that are still in existence today.
Something that may not be known to many in this context is that the use of the screw was also explored extensively in the German-speaking world.

The German physician, pharmacist and scientist Georgius Agricola (Latin name), or George Bauer (1494 -1555), is considered one of the most outstanding Renaissance scholars of his time. His work and expertise spanned many fields in the natural sciences and humanities. The thing that makes him so interesting for us are his texts and illustrations of threads and screw systems, produced with such exacting attention to detail that they were suitable for producing reproductions.

The long road to ISO threads

Machine production of nuts and bolts began with the onset of the industrial revolution. Products that previously had to be produced by hand could now be manufactured more efficiently, faster and at lower cost in factories. This laid the foundation for their wider use, as the steadily increasing demand could now be better met.

What is interesting to mention here is that as early as 1568 in France, thread sheath gauges or plates embedded in lathes existed for the manufacture of nuts and bolts ( built by Besson), but it was not until 100 years later that the English company Hindley of York improved and adapted them.

In 1760, the brothers Job ( or John, in some sources) and William Wyatt introduced a manufacturing process using a machine for the mass production of screw threads. Something that had been intended for wood screws was thus applied to screws made of iron. Unfortunately, despite holding a patent, the brothers were not successful and had to close their company after only a few years. Nevertheless, a milestone was set in the history of the production of screws and thus threads.

Along with the development of machines which improved and accelerated processes, new materials also began to be used. At the same time, material testing machines were invented, enabling higher quality materials to be used in production.

As each country and factory had different production processes, differences existed in size, material and properties. Therefore, it was necessary to introduce uniform quality criteria and thread dimensions.
As early as 1841, the Englishman Joseph Whithworth campaigned for the standardisation of all screw threads in England, but this was not established throughout Europe at the time. The VDI (Association of German Engineers) took over the development of guidelines in Germany in 1859. These defined regulations for the quality, material, standardised thread dimensions and properties.

It was not until 1948 that an agreement was reached between Great Britain, the USA and Canada on the use of imperial units of measurement for screws. This was followed by a worldwide standardisation of the ISO thread in 1964. 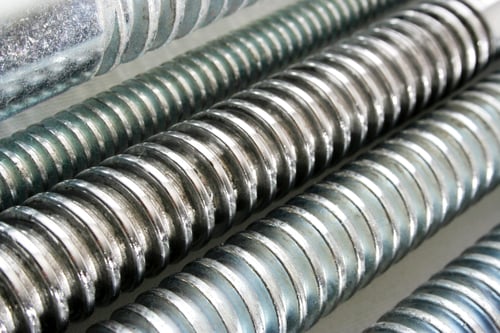 The end of a long journey

A long and impressive road lies behind the development of what many might think of as a trivial item, nevertheless the technology and areas of applications are continually evolving.

Eichenberger is also constantly developing, as we challenge the limits of what is technically feasible on behalf of our customers. No matter whether the installation space needs to be optimised, the dynamics enhanced, the energy efficiency increased, the weight reduced, the service life extended or the costs lowered, we develop the right screw drive solution in collaboration with you to bring your innovation to the forefront of the market.

Are you looking to optimise a drive solution systematically? We can support you in realising the perfect drive solution. Find out here how we can help you.

Preview of Part 2 of our quick thread (drive) school
- Where do we go from here?

At this point we have explained about the origin of the screw and the thread. However, there are more interesting details and aspects worth knowing on the subject of threads. Learn more about thread rolling here (german), and also more about the basics, processes, tools and applications of rolled high-tech threads.

In the next instalment, the question of what a screw drive is, what makes it tick and what forms exist will be addressed.

Our hands: whether at home or at work, they are in action for us every day, mastering tasks throughout the whole day. It is ...
weiterlesen

A striking resemblance: our environment and the ecosystem of ants, what is the connection with ballscrews?

The need to solve practical and ever more challenging issues means that regardless of age-old traditions, mechanics remains a ...
weiterlesen

Safety in the area of high voltage using cold-rolled ballscrews

Figuratively speaking, electricity is the lifeblood of our modern society and economy. Without it, nothing is possible. Circuit ...
weiterlesen